In an electrical system ‘Fault’ is the condition which arise due to the malfunctioning of some component or wrong electrical practice. The fault may lead to a very dangerous situations such as explosion & fire if not cleared timely, not only this the amount of time for which fault persists in the system it continuously deteriorates the system health causing high energy losses resulting in increased thermal stress upon the system. From the above paragraph, it is clear that the faults are hazardous to the system & requires to be cleared at the soonest thus, there is a need of such device which not only is capable of clearing the fault but also have a lower opening time in order to save the let-through energy & minimize the thermal stress. Fuse & Circuit Breaker are the devices that fulfill the above criteria of the protection device i.e. capability of clearing the fault & also have a lower opening time hence saves the let through energy as well.

Complying with IEC 60269, fuse is a device that blows in case of a fault & can offer protection up to 80KA even beyond that. Whenever there is a fault in the system the fuse blows off & protects the system by cutting off the supply. A fuse is generally made of a ceramic body, having an element, The body is filled with quartz sand as shown in the fig: 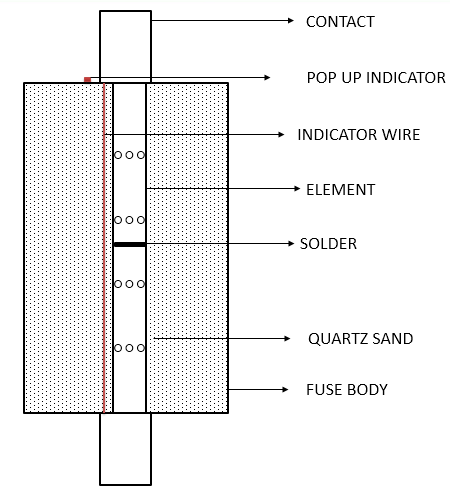 Whenever there is an overload in the system, the solder as shown, gets into a chemical reaction resulting in cutting off the supply. In case of short circuit the element gets torn due to the application of high electrodynamic force on the same because of high current such as short circuit. The blown fuse can be easily identified by the pop up indicator which pops up whenever the fuse interrupts. The function of quartz sand is to successfully quench the arc & absorb the pressure thus, not letting the fuse to explode. The fuse is the staunchest combatant of the system as it is the quickest interrupting device available in the entire electrical system. The fuse blown within 2-5ms hence saving the maximum amount of let-through energy.

As per IEC 60269, the fuse can be identified as mentioned below:

Fuse although, is the most dependable & trusted protection device but can be used only one time, in no case the fuse can be repaired, after it blows off it only needs to be replaced.

What is Circuit Breaker?

A typical labelled diagram for the circuit breaker is as shown below: 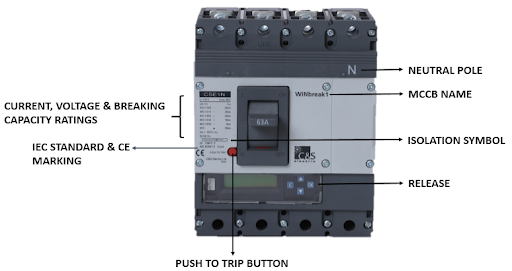 A circuit breaker is not required to be replaced after tripping once, instead it must complete its total no of operations as declared by the manufacturer. The tripping time for the circuit breaker may vary w.r.t its type, for ex. the trip time for MCCB is less than 10ms & the opening time for ACB shall be less than 30ms. Not only this, MCCB also has a dedicated position for tripping, whenever the MCCB trips, its actuator lever comes in between i.e. neither in ‘ON’ nor in ‘OFF’ position.

As per the method of tripping, the circuit breaker can be below types

Previous ArticleEverything You Need to Know About Circuit Breakers: Introduction, Applications, and Types
Next ArticleContactor vs Control Relay: Difference between Contactor and Control Relay
Search
Recent Posts
In Focus